The Douglas Best Cup was bought  in the 1949 by our member and former president Godfrey Best who was a local studio photographer with premises in Darkes Lane next to the old cinema.  He bought the cup in memory of his brother Douglas Best.   The cup was one of two beautiful cups we had at that time.   This one was a two handed loving cup with lid made in 1757 by Thomas Gilpin a London silversmith. In 1999 the committee wanted to raise funds for the Society and also did not want to pay insurance premiums on valuable cups. The two cups were assessed by Bonhams and this one was valued at £2,500.   Godfrey Best’s widow was still alive at the time and she gave her blessing that the cup should be sold.   Graham Coldrick argued against the sale but was outvoted.  He did not want our history to be sold off so he bought this one for the valuation price saving the club the auctioneers fees and VAT.  The other cup raised £1,500 at auction.  Both cups were replaced by the much cheaper versions which exist today (2021). 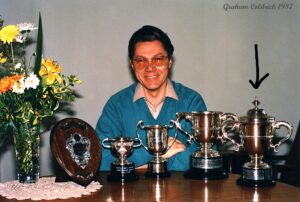 Graham Coldrick with his winners tally. The Douglas Best Cup on the far right